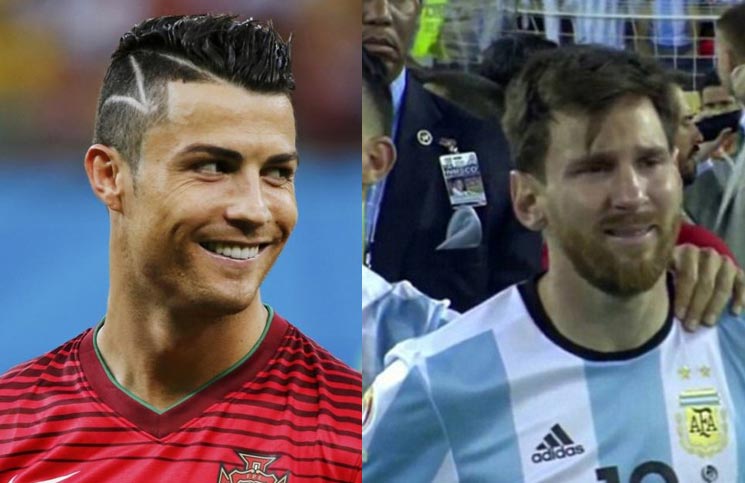 The Real Madrid forward’s second successive win drew him level alongside Barcelona rival Lionel Messi on five Ballons d’Or, after the Argentinian took second in the vote, with Brazilian Neymar third.
The 32-year-old was the top-scorer in last season’s Champions League as Real successfully defended the trophy with victory over Juventus in June and also led the Spanish giants to their first La Liga title in five years.

“Of course I feel happy. This is something I look forward to every year,” Ronaldo said at the ceremony at the Eiffel Tower in Paris.

“The trophies won last year helped to win this award. Thanks to my Real Madrid team-mates. And I want to thank the rest of the people who helped me reach this level.”

He scored 42 goals in all competitions for Real last season, and also netted 15 times in European World Cup qualifying.

Ronaldo will lead Portugal at next year’s World Cup in Russia as he looks to add football’s greatest title to the 2016 European Championship win when the Portuguese beat hosts France in the final.

Messi and Ronaldo have now shared the last 10 Ballons d’Or since the latter’s first win after leading Manchester United to the 2007-08 Champions League title.

“I hope to play at this level for a few more years, I hope the battle with Messi continues, things happen for a reason,” he added.

“I feel good this season and we’ll see what we win at the end of the year.”

When asked if he would like to finish his career at the Santiago Bernabeu, Ronaldo said: “I’m happy at Real Madrid, I want to stay there… If possible.”

The prestigious France Football magazine award, which was first won by Englishman Stanley Matthews in 1956, is decided upon by a journalists’ ballot, with each naming a top five from a list of 30.

It was a replica first two from 2016, which was the first year after FIFA ended its association with the Ballon d’Or and restarted its own Player of the Year award.

Neymar will be hoping to take over the mantle of Ronaldo and Messi, 30, in the coming years after coming third for the second time, having finished fifth last year.

The 25-year-old left Messi’s Barcelona during the close season in a world-record transfer to Paris Saint-Germain, where he has already scored 15 goals this season.

“Neymar has a lot of talent, a lot of potentials, and I’m sure he’ll have some chance to win in the future,” Ronaldo said.

However real Madrid Centre-back Sergio Ramos was the highest-ranked Spaniard and the third Real player in the top 10, one ahead of French rising star Kylian Mbappe in seventh.