How to avoid a fight about Trump during Thanksgiving dinner

But this year, taking in the big hits with the extended family might not be so much fun.

Donald Trump has managed to politicize the game to such a degree that the seemingly innocuous pleasure of football-viewing could easily prompt a row. Or brawl.

Football is clearly off limits. But is there any relatively neutral topic left that the president, has not ruined? It is not looking good:

“Roy’s working on a bit of project in the backyard, aren’t you Roy?” Aunt Nora says. Uncle Roy nods.

Someone asks what he’s building. Roy tries to avoid the question. The family press him harder.

Silence. “What, to keep out the Mexicans?” someone quips.

A fixture of Thanksgiving morning is watching a series of bloated, brightly-coloured, hot-air filled figures wobble their way down New York’s Sixth Avenue.

Even setting aside the obvious parallels with Trump, the matter of Macy’s long association with the parade is fraught with Trump-related problems.

That’s because for a long time you, too, could look like Donald Trump, by swaddling yourself in ties, shirts and socks purchased from Macy’s. The products, the majority of which were made in China, all captured Trump’s signature flair.

But in 2015 Macy’s stopped selling Trump-apparel after the 71-year-old former real estate developer referred to Mexican immigrants as “rapists”.

That is surely enough to anger both the ardent Trump supporter and the fashion conscious neutral, and means the parade is not safe territory.

“Where are you going on holiday?”

It’s only safe to talk about vacations if you’re planning to visit Wisconsin.

A casual conversation about someone’s golf handicap could – in the wrong hands, or simply in malicious hands – turn into a discussion of Trump’s golfing habit. 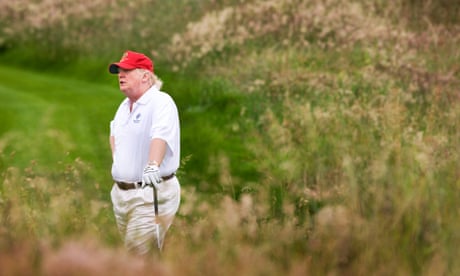 Before Trump was president he spent a significant amount of time criticizing Barack Obama for playing golf. But since taking office Trump has played far more golf than Obama ever did.

Oh and apparently he also cheats.

“You can buy Trump wine you know,” someone says as a bottle is produced. The dinner, and wine as a concept, is forever ruined.

If you have to buy wine just don’t buy it from the Trump winery. Not as a joke. It’s not worth the potential fighting.

If reviews are to be believed the Trump vintage is also not worth the money. “Pungent. Like cheap perfume,” was the verdict from VinePair beverage.

Avoid all references to people, places and things and family equilibrium should be fine