International Updates On CoronaVirus Covid-19 -The coronavirus outbreaks in China and South Korea appear to be slowing, as countries elsewhere in the world adopt drastic measures to try and stamp out the infection.

In Italy, where some 16 million people in Lombardy and other parts of the north are now under quarantine, there were 133 deaths reported on Sunday, bringing the total to 366. More than 7,000 people in the country have been confirmed to have the virus.

In Iran, there were 49 new fatalities. Some 194 people have now died from COVID-19 there.

But the latest figures from China and South Korea suggest the virus might be slowing in northeast Asia.

China reported 40 new confirmed cases on Sunday, compared with 44 the day before. That is the lowest number since the National Health Commission started publishing national data on January 20.

New infections in South Korea also appear to be slowing.

Here are the latest updates:

Travelers from 14 countries are banned from entering Qatar, the country’s Ministry of Health announced.

The restriction comes as the country registered three more cases of corona-virus, bringing the total number of people testing positive up to 15.

A Chinese company says it has developed the country’s first facial recognition technology that can identify people when they are wearing a mask, as most are these days because of the coronavirus, and help in the fight against the disease.China employs some of the world’s most sophisticated systems of electronic surveillance, including facial recognition. But the coronavirus has resulted in almost everyone wearing a surgical mask outdoors in the hope of warding off the virus – posing a particular problem for surveillance.

Now Hanwang Technology Ltd, which also goes by the English name Hanvon, said it has come up technology that can successfully recognise people even when they are wearing masks.

“If connected to a temperature sensor, it can measure body temperature while identifying the person’s name, and then the system would process the result, say, if it detects a temperature over 38 degrees,” Hanwang Vice President Huang Lei told Reuters in an interview.

Following Japan’s travel restrictions on South Koreans, more K-pop concerts scheduled in Japan are being cancelled, threatening to hurt the Korean entertainment industry in its most lucrative market.

South Korean boy-band Super Junior called off its tours scheduled to take place on March 25 and 26 in Japan, citing the Japanese government’s measures to “curb immigration”.

Japan said starting on Monday, people arriving from South Korea will be quarantined for two weeks. Tokyo also suspended visa waivers and the validity of existing visas for South Koreans, followed by a similar move by Seoul, rekindling a diplomatic feud between the neighbors.

Europe needs to come up with a “massive” economic stimulus plan to cope with the impact of the coronavirus outbreak, said French Finance Minister Bruno Le Maire.

Le Maire told France Inter radio that the amount needed for the stimulus plan will be discussed at a March 16 meeting with his European counterparts. Le Maire also said the coronavirus could cut French economic growth below 1 percent in 2020 from a previous estimate of 1.3 percent.

The Italian government as well urged the European Union to adopt a package of measures to counter the impact of the coronavirus outbreak on the economies of the bloc.

The drop comes following a crash in oil prices on the global market after OPEC and its allies failed to reach a deal last week on production cuts to shore up prices dented by the coronavirus.

Other markets in the Middle East fell as well: Boursa Kuwait shut down within 30 minutes of opening as stocks again dropped by 10 percent, the third such emergency halt to trading in recent days.

Italy to use a ‘massive shock therapy’: PM

As Italy fights to contain the coronavirus outbreak, Prime Minister Giuseppe Conte pledged to use “all human and economic resources” to tackle the crisis.

“We will not stop here. We will use a massive shock therapy,” Conte told daily newspaper la Repubblica in an interview.

Conte added that the government would use the flexibility envisaged by European budget rules “in full”.

Economy Minister Roberto Gualtieri last week pledged some 7.5bn euros ($8.55bn) in measures to help the economy withstand the largest outbreak of the illness in Europe, raising this year’s budget deficit goal to 2.5 percent of national output from its current 2.2 percent. ($1 = 0.8769 euros).

Gulf Air suspending all flights in and from Saudi Arabia

Bahrain-based Gulf Air announced on Twitter that it will suspend all flights to and from the Kingdom of Saudi Arabia.

ALERT: Suspension of all flights to and from the Kingdom
of Saudi Arabia until further notice

26 people are talking about this

The move comes as Saudi Arabia, which has reported 11 cases of coronavirus so far, suspended aircraft and ship services with Bahrain and eight other countries, including Kuwait, UAE, Lebanon and Syria.

There has been more turmoil on Asian markets this morning, with investors selling stocks and buying bonds amid growing concern about the health of the global economy, not only because of the impact from the coronavirus but also because of oil.

Read more from our Impact team on that here.

Two members of US Congress go into isolation over virus

Texas Senator Ted Cruz and Arizona Representative Paul Gosar have put themselves into a 14-day quarantine after determining they had contact with a man at the Conservative Political Action Conference  who was later confirmed to have the coronavirus.

Several other senators and members of the House of Representatives were also at the event, where US President Donald Trump and Vice President Mike Pence both spoke.

The White House says there is no indication that either of them met or were in “close proximity” to the man who was confirmed to have the virus.

South Korea is hopeful that the situation will improve, although it is warning against calling the peak of its outbreak too soon.

“I’m still extremely cautious, but there’s hope we can reach a turning point in the near future,” Prime Minister Chung Sye-kyun said on Monday before returning to Seoul from the hard-hit southeastern city of Daegu.

Vice Health Minister Kim Gang-lip said it was premature to say the crisis was over, as new cases continued to emerge.

“There are still many patients arising from Daegu and nearby regions … and sporadic infections continue to emerge elsewhere, though they’re not spreading as fast,” Kim told a briefing.

“In fact, now is the time to concentrate all our capabilities to bring a clear reduction in infections.”

Near-major tennis tournament cancelled in US

The BNP Paribas Open, a near-major tennis tournament that was set to begin this week in the California desert, has been called off. This is the largest sporting event in the US to be called off over coronavirus concerns.

The announcement came on Sunday night after many players were already in the desert practising.

Qualifying matches were to begin on Monday with women’s main draw matches starting on Wednesday and the men’s games the day after.

The coronavirus is having quite an impact on the world’s sporting events and numerous tournaments have been cancelled. We’ve been keeping a list.

South Korea has adopted a new distribution system for face masks and rationed the number each person can buy each week.

People can now buy masks only on the weekday corresponding to the last digit of their birth year.

That means people born in years ending with one or six can buy masks on Mondays, while those born in a year ending with three or eight can buy on Wednesdays.

No one is allowed to buy more than one a week.

Shanghai Disneyland, which was closed on January 25 because of the coronavirus, has reopened some of its shops, restaurants and resort facilities on a limited basis.

Visitors will need to go through temperature checks before admission, and the resort will follow an “extensive range of measures designed to ensure a safe and healthy experience for all guests,” it said on its website.

Ship heads to Singapore after being turned away by Thailand, Malaysia

The operator of the cruise ship Costa Fortuna said it was heading to Singapore to end its journey on Tuesday as planned, after it was turned away from ports in Malaysia and Thailand over coronavirus fears.

Italian cruise line Costa Crociere said there were no suspected virus cases among the passengers.

The company said it would cancel a cruise due to depart on March 10 from Singapore.

The Grand Princess, a cruise ship carrying more than 3,500 people from 54 countries, is expected to dock in California on Monday.

Twenty-one of those on board have been confirmed to have the coronavirus; everyone will be required to spend 14 days in quarantine once they disembark. 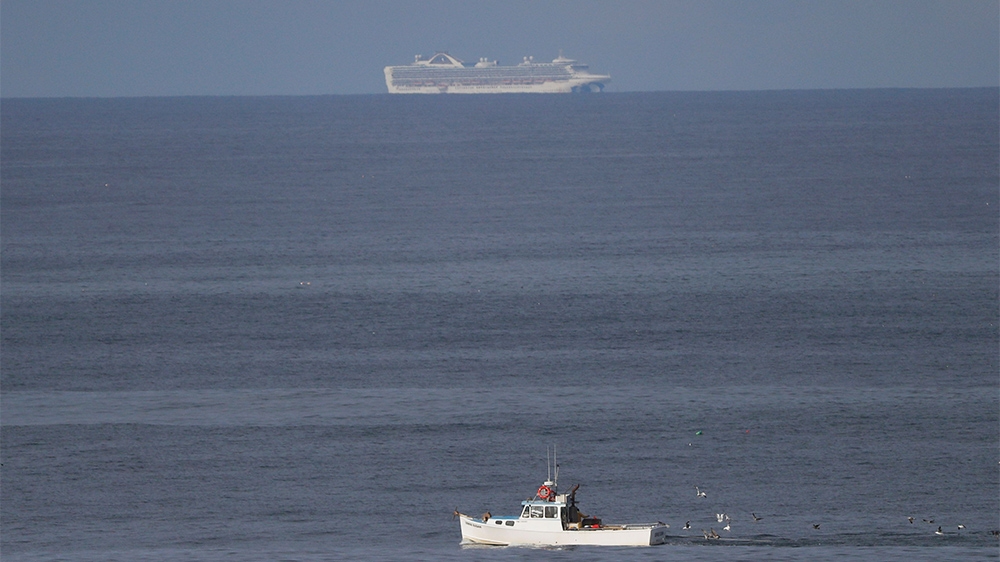 Those needing acute medical care will leave the ship first.

“This is a time that we must be guided by facts and not fears, and our public deserves to know what’s going on,” Mayor Libby Schaaf said.

A woman in her 40s, who attended a live music show in Osaka, has become the first person to test positive for the coronavirus in Kobe, officials said.

The Korea Centers for Disease Control and Prevention (KCDC) has announced its latest figures on the coronavirus outbreak there.

It confirmed a total of 248 cases on Sunday – the smallest increase since late February and the fourth successive day that it has been lower than the day before.

The KCDC will provide a further update in the afternoon.

Embassies close in North Korea as diplomats evacuated over virus

AFP is reporting that several embassies in North Korea were closed on Monday as diplomats were flown out of the country.

The evacuation came after reports that a special flight was being arranged to fly diplomats and other foreigners from Pyongyang to the Russian city of Vladivostok.

Some 60 people were expected to be evacuated.

North Korea has not confirmed a single infection but has imposed strict rules, including closing its borders and putting thousands of North Koreans into isolation.

It also subjected hundreds of foreigners – including diplomats – to severe restrictions. 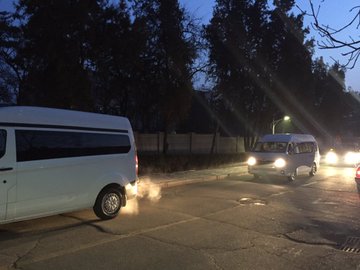