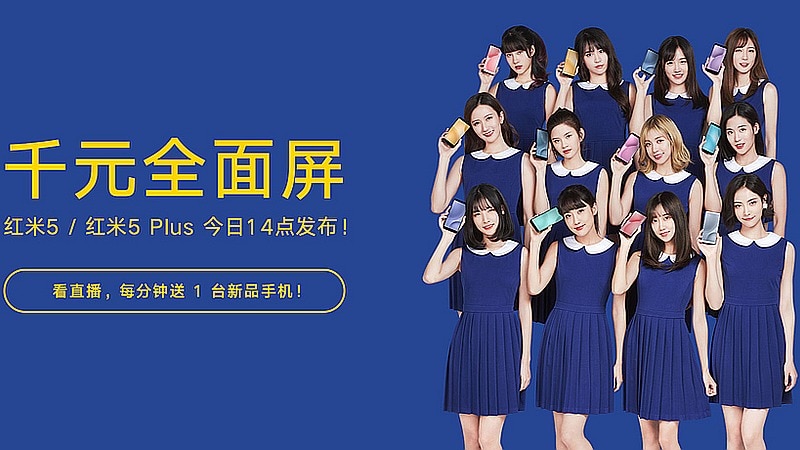 Furthermore as we all know xiaomi Redmi 5 & Redmi 5 Plus will be launching via the Chinese manufacturer at an event in Beijing china that kicks off at 2pm CST – or 11:30am IST.

However the launch will via live show & streamed on the company site, and you can stay tuned to Gadgets 360 for launching details for the event.

Meanwhile the Redmi 5 & Redmi 5 Plus have been teased via Xiaomi multiple times in the lead-up to the launch, and thanks to this, we’ve seen the smartphones, and know they will sport 18:9 displays, rear fingerprint scanners, and a selfie flash. Apart from official information, specifications and prices have also been leaked.

Meanwhile just some hours ahead of the launching day, a new Xiaomi Redmi 5 and Redmi 5 Plus leak corroborates previously leaked specifications. Shared on Weibo by a tipster, the leak claims the Xiaomi Redmi 5 will sport a 5.7-inch FullView 18:9 display, a 12-megapixel rear camera, and be powered by a Snapdragon 450 SoC.

The same leak claims the Redmi 5 Plus sports a 5.99-inch display, a 12-megapixel rear camera, and be powered by a Snapdragon 625 SoC. Both the phones will come in Black, Blue, Gold, and Pink colour options, a leak mentions.

A TENAA listing had previously leaked some of the key Redmi 5 specifications, including three RAM and storage options – 2GB/ 16GB, 3GB/ 32GB, and 4GB/ 64GB. Storage is said to be expandable via microSD card (up to 128GB). The smartphone was listed with a 3200mAh battery – significantly smaller than the Redmi 4’s 4100mAh offering. It is said to sport 12-megapixel rear camera and a 5-megapixel front camera.